The Inquisition Wars have been fought...

We had everything you'd want in a tournament- nice looking armies, some good table/terrain variety, and hair raising scenarios that had everyone running for cover and killing each other in equal measure.

There was also a "team" aspect to this tournament, the "Red Team" and the "Black Team" representing armies that were manipulated into fighting for two rival Inquisitors. Black players were only seeded against Red players, and vice versa. It made for some fun/different matchups, and "Red Team" gets bragging rights as the highest overall score holders. In the results below, the color of the player represents which team they were on.

It was also great to see a good sized contingent from Singapore turn out for the fun, and they ended up running off with two of the three trophies of the day. Here's the winners:

Congratulations to all the participants, particularly the guys that were in their first tournament! Also, a very special thanks to the guys that helped make this tournament possible with their assistance:

Saleh, the best Tourney Grot I've had yet!

Seriously guys, MANY thanks for your volunteerism. This tournament would not have been as cool as it was without your help.


Complete results below, and pics pending... 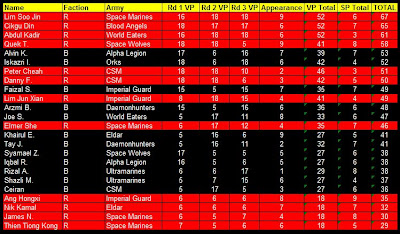 Edit: Azlan has posted a ton of pics on his blog- check them all out HERE

Wong40K has also posted some nice pics. Check them out here.
Posted by deathkorps at 11:01 AM

Please be civil in your comments- thanks! 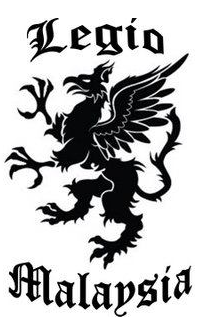